We awake next morning to a deluge of rain in Sepilok.

Sepilok is an orangutan rehabilitation centre, where they prepare orphaned or otherwise unready orangutans for release back to the wild.

The orangutans live in the surrounding rainforest. A feeding platform provides visitors with a view, if you’re lucky.

As we stand waiting for the first orang to arrive, we agree ‘If I were an orangutan, I wouldn’t come anywhere near here.’ The hundred or so people on the viewing platform just could. not. stop. talking.

Finally, a lone orangutan appears along one of the ropes leading to the feeding platform from the forest. She promptly climbs down, scoops up a bunch of bananas, and departs to enjoy them in private.

We get a better view from the ‘nursery’, where young orangutans exercise and socialize with others of their kind. (The photos are blurry because they’re taken behind a glass enclosure a dozen meters away.)

All good things come to an end. Volunteers lead the young ones away.

From Sepilok, a van picks us up and whisks us to the Kinabatangan River. We stay at the Nature Lodge Kinabatangan.

Interesting folks on these excursions. We meet several people with fascinating backgrounds and delightful stories to tell.

We have monitor lizards as neighbours again.

(The electric fence they’re crawling under is to keep elephants out of the property. We notice electric fences around the palm oil plantations around here and wonder what they’re for. Now we know.)

We take several cruises along the river.

On one cruise, we see wild orangutans in two different locations. (Orangutans are solitary – you usually see them alone. Both of these sightings were of an individual moving around their ‘nest’ high in a tree.) No photos because they were quite far away, but to see wild orangutans in their natural habitat – as opposed to in an environment like Sepilok – is a thrill.

‘The monkey also goes by the Indonesian name monyet belanda (“Dutch monkey”), or even orang belanda(“Dutchman”), as Indonesians remarked that the Dutchcolonisers often had similarly large bellies and noses.’

Crocodiles. (Sorry, we weren’t going to try to get any closer.)

This is a young crocodile. We have a closer photo, but the vegetation  here shows clearly how cute and teeny-tiny he is.

This is a fuzzy shot of a stork-billed kingfisher. They’re much more beautiful in real life. 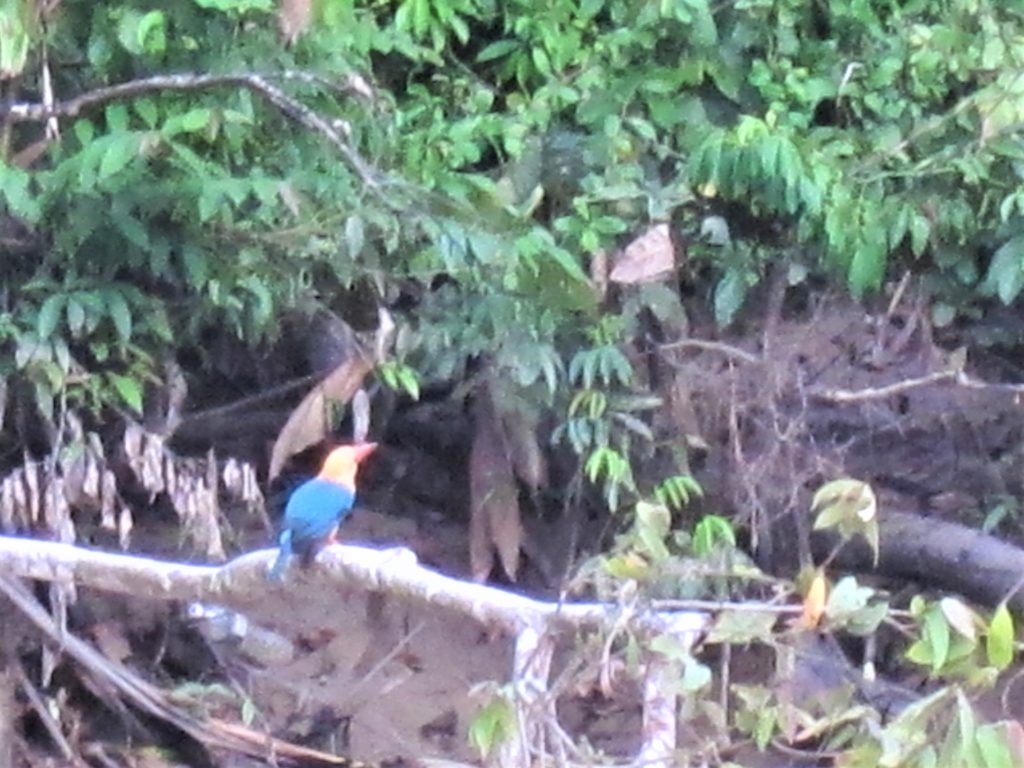 Day 2 is similarly fruitful in sightings.

Also on day 2, we take a walk through the rainforest.

Why is everyone wearing trousers and long sleeves, you ask?

Because the forest is full of leeches.

Sight or Insight of the Day – Sepilok

Borneo is full of wonderful creatures. I hate to say this, but they’re probably doomed. If there’s an orangutan alive outside of a zoo in 50 years, it’ll be a miracle.

Illegal logging and palm oil plantations strip the rainforest that once covered virtually the entire island. This activity will never stop because it benefits powerful people in all the countries involved. Corruption is rampant.

(I chuckle when ethics relativists say ‘We’re just as bad in Canada. Look at the Duffy scandal, for instance.’ The misappropriation of a mere $90,000 – and only Canadian dollars, at that – pales in comparison. The current prime minister of Malaysia is said to have transferred a fortune into his personal bank accounts. To the tune of US$700,000,000. That’s right. Seven. Hundred. Million. Dollars. U.S.! He’s still PM, any local media reporting on it is immediately shut down and the journalists charged with ‘threatening national security’.)

After their betters have cleared the way with new roads, simpler folk often move in, a baby on each hip, to slash, burn, and to poach the now-available wildlife.

Borneo reminds us a lot of Madagascar, where exotic nature and wondrous fauna attract well-heeled tourists in the final stages before the island is reduced to barren hills and parlous overpopulated villages.

I was going to mention this a few entries back, in regard to the luxuriousness of private health care, but decided it sounded too misanthropic. But what the heck, I’ll say it anyway. I sometimes have a fantasy in which 75 % of the Earth’s population are taken up in some sort of Rapture scenario. Then those of us left behind could all live like Scandinavians!